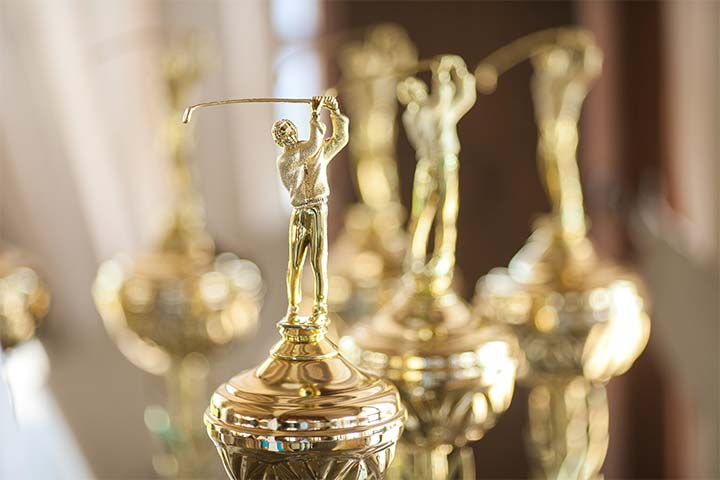 These types of exercises are also powerful tools for learning to work together.  It provides positive reinforcement of teamwork and allows individuals to build inter-personal relationships that can help on the job.

Usually, your team will consist of people with very different golfing skill levels. Differing skill levels occur every day on the job, so this kind of team building exercise is appropriate. To accommodate the varying skill levels of your team members, I recommend playing a Scramble, or more accurately Scramble Stroke.

In a scramble, team members all hit each shot. They then decide which is the best shot and then all team members hit the next shot from that spot. This continues until the ball is in the hole. Stroke play counts the number of times the team hits the ball. The team with the lowest total wins.

This style of play lets each team member contribute where they can. It helps everyone on the team feel like they are contributing, which is the same spirit you are trying to build at the workplace. You may find some of your better golfers hitting the best drives, but some of the newbies or non-golfers may turn out to be good at putting or chipping.

Picking an appropriate location is very important. You want one that has short holes and nine-hole courses are sufficient. (It would take too long for a group of any size to finish 18 holes and it can be tiring if you aren’t used to it.)

In addition to the course itself, consider club rentals, practice facilities, restaurant or banquet space, and meeting rooms. Non-golfers will need a few clubs. If the location chosen has a driving range and/or a putting green, the golfers can “tune-up” and the non-golfers can be taught some basics. If you want to include lunch before the match or dinner afterwards, you will need a place that serves food. Finally, you will need a meeting room so you can present the awards after the event and reinforce the team building.

Usually the fewer rules the better. Sometimes scramble golf is played that each player on the team has to contribute at least 1-2 drives and 1-2 putts. This is to keep one good golfer on the team from hitting all the “best ball” shots for their team while their team members just watch. Unless you have low-handicap golfers, I usually don’t find it necessary.

Put someone in each group who understands the rules of golf and course etiquette. They can keep the group moving. Set a maximum number of strokes per hole (usually 2-3 over par) so no group gets bogged down on a bad hole. Keep each team at or under four players if possible and make sure everyone has their own clubs and bag. Sharing equipment slows down play too much.

Once you have set all this up, start talking it up among the team.

Let the golfers know that it will be a stroke scramble. Let the non-golfers know that they will be playing with at least one “real” golfer and that each shot is played from the “best ball” location. Let them all know that this is a team building event not a golf tournament. The object is to have fun and build team spirit and skill at working together. They are not trying to break the PGA record for the course.

Decide ahead of time what awards to hand out at the conclusion of the event. The course golf pro can help. A long-drive hole or a closest to the pin hole gives the golfers something to shoot at. Identical prizes should be given to all team members of the team with the lowest score and of the second and third place teams. Humorous awards like most improved, worst duffer, shortest drive, most outlandish outfit, etc., can lighten the mood as well as give you a way to include more non-golfers in the prizes.

A golf-based team building exercise can work for your people. It provides positive reinforcement of teamwork and lets them build inter-personal relationships that can help on the job.